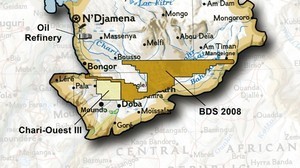 Chad’s oil revenues fell 68% year-on-year in the first quarter of 2021 because of a corporate tax waiver aimed at preserving jobs during the COVID-19 pandemic, a government report said on Tuesday.

Chad’s government in April 2020 announced a 50% cut in taxes on businesses for six months to reduce pandemic-related layoffs. The policy was renewed in October.

“This decrease is partly explained by the drop in taxes collected on oil companies compared to the previous financial year, which was impacted by the COVID-19 pandemic,” Chad’s Observatory of Public Finance said in the report.

Chad is Africa’s 11th largest oil producer with an output of just under 116,000 barrels per day in 2020, according to data compiled by the U.S. Energy Information Administration.

It fell into crisis earlier in April when long-standing president Idriss Deby was killed on the battlefield, leading to a military takeover led by his son. Anti-military riots erupted on the streets, led by ranks of unemployed youth angry at a lack of job opportunities.

Crude exports rose slightly in the first quarter versus the same period last year, but production declined 4%, partially due to a halt in activities by mining and trading giant Glencore, the report said.

Glencore, which currently holds the country’s largest external commercial debt, shuttered its Chadian operations in March 2020 as a coronavirus precaution.

Earlier this month, a committee of Chad’s creditors, – including China, France, India and Saudi Arabia – announced negotiations on a restructuring of the country’s debt, while encouraging Chad do the same with its private creditors.
Source: Reuters (Reporting by Mahamat Ramadane, Writing by Cooper Inveen, Editing by Edward McAllister, Kirsten Donovan)