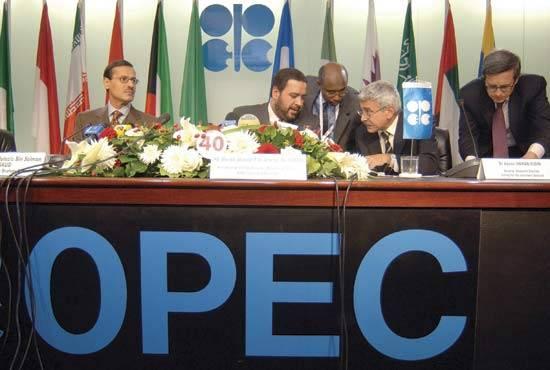 (Bloomberg) –The OPEC+ alliance descended into bitter infighting after a key member blocked a deal at the last minute, forcing the group to postpone its meeting and casting doubt on an agreement that could ease a surge in oil prices.

The unexpected turn of events leaves consumers in limbo, unsure of whether OPEC+ will help to ease the inflationary pressures caused by tight oil supply. It also tarnishes the cartel’s carefully reconstructed reputation, raising the specter of the destructive Saudi-Russia price war that crashed the global crude market last year as the Covid-19 pandemic took hold.

Earlier on Thursday, the Organization of Petroleum Exporting Countries and its allies appeared to have an agreement in principle to boost output by 400,000 barrels a day each month from August to December. It would also have extended the duration of the OPEC+ deal, setting the final expiry of the cuts in December 2022 instead of April.

That preliminary agreement was upended by the United Arab Emirates, which said it will block the deal until the baseline for its own cuts is adjusted, effectively raising its production quota, delegates said.

“Any request to adjust the production quota would be like opening Pandora’s box,” said Giovanni Staunovo, a commodity analyst at UBS Group AG. That could add up to a production increase of about 700,000 barrels a day for the UAE alone, and “other OPEC+ states might also request an adjustment.”

The UAE argues that the change is necessary because, under the current terms of the OPEC+ deal, it is making proportionally deeper cuts than other members. That unfairness would persist for even longer if the accord is extended until the end of 2022.

Yet, reflecting the emirates’ new capacity in its baseline could allow the country to pump hundreds of thousands of barrels a day of extra crude while technically remaining in compliance with its obligation to cut.

Russia and Saudi Arabia, the leaders of the group, angrily rejected the UAE’s request, delegates said. Talks will resume on Friday, allowing time for consultations at higher levels of government, delegates said.

“It’s hard to see either side backing down enough to get a clean outcome tomorrow,” said Richard Bronze, head of geopolitics at consultant Energy Aspects Ltd. “Talks may even extend through the weekend, as any compromise will likely involve complicated OPEC maths.”