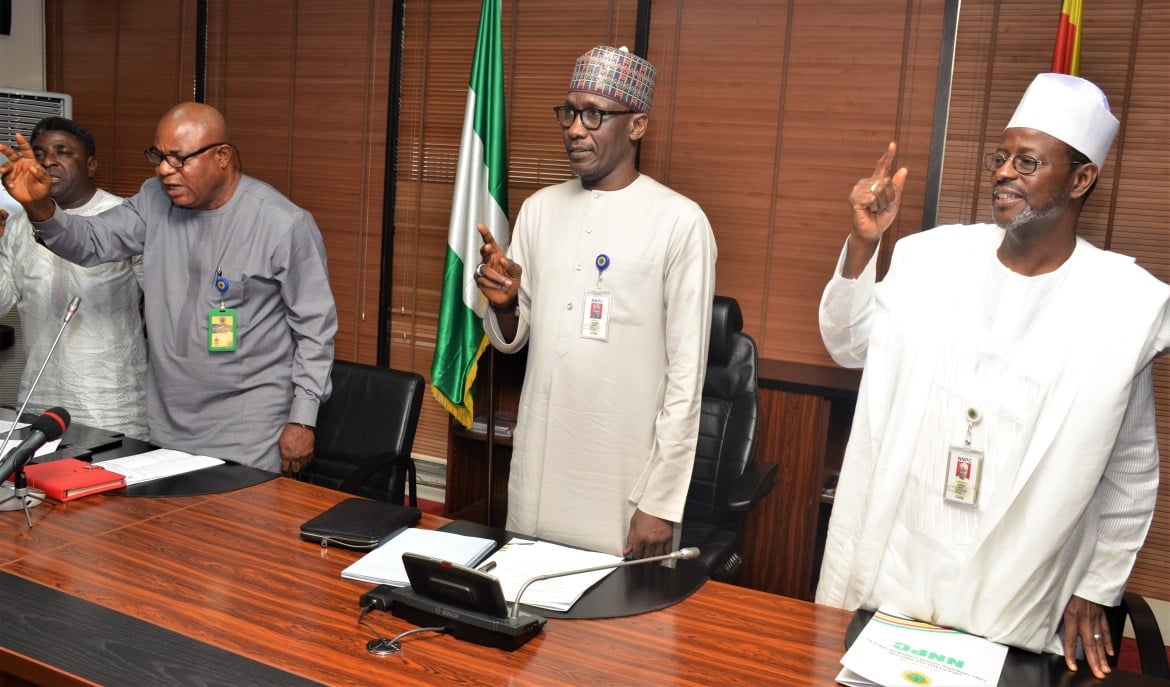 It is true that the federal government, through the Nigerian National Petroleum Corporation was able to stave off an industrial crisis in the energy sector by entering into a deal with the National Union of Petroleum and Natural Gas Workers to repair the nation’s roads, which the union said have claimed several lives and vehicles of their members, the question is, how far can this arrangement go in tackling the problem of bad roads in Nigeria, writes Festus Akanbi

There is no denying the fact that roads are the arteries through which the economy pulses. By linking producers to markets, workers to jobs, students to school, and the sick to hospitals, roads are vital to any development agenda.

However, in Nigeria, successive administrations have found it difficult to fully maximise the full potential of roads as a tool of transforming the nation’s economy.

As observed by a renowned lawyer and industrialist, Chief Afe Babalola, it is common knowledge that Nigerian roads are generally either in a state of disrepair, poorly maintained, or altogether untarred. According to him, with Nigeria boasting of the largest road network in Africa, it is not surprising that only about 60,000km out of its estimated 195,000km or road network is paved.

As private and public businesses continue to count their losses over cases of avoidable loss of lives and damage to vehicles, the leadership of the National Union of Petroleum and Natural Gas Workers (NUPENG) recently threatened to go on strike if that was the language the government understood to halt the breakdown of order on the roads.

NUPENG had said the strike became necessary because it has lost many members and properties due to dilapidated roads.

But the Nigerian National Petroleum Corporation (NNPC) appealed to the union to shelve the planned strike as it will negatively affect energy security.

In the strike notice, the union said, “We wish to urgently draw the attention of the federal government to the harrowing experiences of the owners of petroleum trucks in the country. The only means of moving petroleum products across the country is by roads, using trucks. We can confidently tell you that this means of distribution is presently endangered and require urgent federal government stimulus intervention fund to prevent it from total collapse.

“We are shocked at the lackadaisical attitude of local, states and Federal governments to the issues of addressing the degenerating state of Nigeria roads before the coming of the current raining season despite all our warnings for them to make necessary construction, repairs, and maintenance of all our roads, which are now in a parlous state and becoming practically impassable.”

True to expectations, the federal government through the Nigerian National Petroleum Corporation (NNPC) promptly responded to the threat by entering into a compromise as a condition to call off the strike, which could have paralysed economic activities in the country.

The NNPC says it will rebuild damaged roads under the road infrastructure tax credit (RITC) scheme.

Group managing director of NNPC, Mele Kyari, made this known during an engagement with stakeholders in Abuja, a few weeks ago.

Today, the strike has been called off and the federal government has announced the shape the nationwide road repair would take, experts however wondered if the government needed to be blackmailed into fixing the road, in the first instance.

Nigeria is a country where the majority of middle-class citizens rely on fairly used vehicles, a development which is being compounded by the poor state of the roads.

However, Babalola, in an article titled, “The deplorable condition of the Nigerian road: A bane to economic sustainability,” explained that though the oil workers’ strike was subsequently called off due to some intervention by the federal government, one cannot but agree with the motive behind NUPENG’s intended strike. There is no doubt that road usage accounts for a great percentage of transportation, which means that the deplorable condition of the roads which cars, trucks, buses, and motorcycles are forced to ply together is bound to engender occasional crashes.

He maintained that “Practically every Nigerian and every sector of the Nigerian economy relies on one form of transportation or the other, with the road being the most utilised means. This, therefore, connotes that a good road network where commuters arrive at their destination without any delay occurring from bad roads, or where goods are safely and timeously transported from one location to the other is bound to foster economic progress.

“No doubt, good road infrastructure affects the flexibility and mobility of workforce from one point to the other, and it is indeed central to good governance and public welfare. Undoubtedly, a seamless road network and infrastructure lowers production costs and raises productivity particularly especially in the agricultural sector where the transportation of crops from the farm to the consumers is a major factor in the production chain,” Babalola stated.

Transport industry analysts said there is a need to focus on measures to fix the roads given the latest threats to railway transportation which has begun to come under terrorist attacks.

The Abuja bound rail was attacked by suspected terrorists during the week, prompting the Nigeria Railway Corporation to suspend the sale of tickets.

Like in other parts of the country, Ogun State, which acknowledged the gains of its strategic location close to Lagos State is battling with the problem of bad roads. When THISDAY contacted the state governor, Mr. Dapo Abiodun recently, his question was, where do you expect me to get funds to do all the roads in the state under two years?

To be fair to Abiodun, he inherited a harvest of white elephant projects abandoned by his predecessor, Ibikunle Amosun, and the bad condition of the road has continued to pitch the incumbent with some sections of the state.

Experts believe that even in the industrial sector, a good road transportation network is required to bridge the gap between the place of production to the point of final consumption. Research has shown that there is a strong and positive relationship between road transportation and economic growth in Nigeria. It has equally been demonstrated that transportation infrastructure can improve the well-being of the citizens in Nigeria.

Road transportation contributes to Gross Domestic Product in any country and impacts its economic growth when goods and services are being able to be transported to the end-user. This implies that a good transportation system is a powerful tool in bolstering productivity and effective distribution of goods and services and, in the long run, increasing the economic growth in the country.

However, against the backdrop of the nation’s deplorable transportation network, a study by the National Planning Commission, NPC, in 2018 concluded that Nigeria’s current transport infrastructure is not aligned with the country’s aspiration to become one of the world’s 20 largest economies.

The interesting thing about the problem of road infrastructure is that it cuts across all the regions of the country.

Babalola noted that majority of the nation’s road network was constructed between the 80s and 90s, with a larger portion of them currently deteriorated because of poor maintenance, adding that even when the existing roads are constructed or supposedly maintained, it soon falls into disrepair due to the use of low-quality materials. Despite huge budgetary allocations being committed annually to infrastructural development projects, much yet remains to be seen on how the condition of the roads justifies their fiscal allocation.

To meet the yearning needs, the federal government said that about 794 kilometres of road have been prioritised for construction by eligible companies through Road Infrastructure Development and Refurbishment Investment Tax Credit Scheme.

This follows the approval by the Federal Executive Council (FEC) for some key infrastructural projects to be undertaken by some companies in place of their tax obligations under the Tax Credit Scheme.

Information Minister, Lai Mohammed, said that so far, 11 states covering all the six geopolitical zones would benefit from the road project scheme made possible by Executive Order No. 7.

He identified the companies that had taken the advantage of the initiative as Dangote Industries, Unilever, Julius Berger, MTN, BUA Group of Companies, Access Bank, Transcorp Group, Lafarge, and GZI Industries.

Mohammed said the companies would engage in providing big roads and bridges in exchange for the tax credit.

According to Babalola, “Poor roads continue to be one of the causative factors for road accidents in Nigeria. According to the Quarter 2-2020 Road Transport Data report published by the National Bureau of Statistics in conjunction with the Federal Road Safety Corps, FRSC, 2,080 road crashes, many attributable to the bad conditions of the roads, occurred in Quarter 2-2020. While a total number of 5,353 Nigerians got injured in the road traffic accidents recorded, a total of 855 were killed. The total number of vehicles involved in accidents in Quarters 2-2020 was 3,334.”

The dilapidation of the road due to potholes is a true reflection of the Nigerian state. This is because road plays a developmental role in every economy, which in a way makes it a derived demand as the sector in itself is not productive but is responsive to forces of generation. Effective and efficient road transport systems can provide huge economic benefits that usually result in multiplier effects like better accessibility to markets, employment, and additional investments. Accordingly, citizens that are deprived of transportation infrastructure miss out on several economic opportunities and this could lead to a recession as Nigerian is presently experiencing. This is why the government, at all levels, should move swiftly to right the wrong.